Thrilling battle in the opening race of Qatar Superstock: Al Naimi wins in the last corner 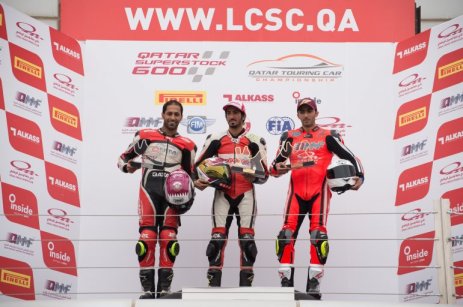 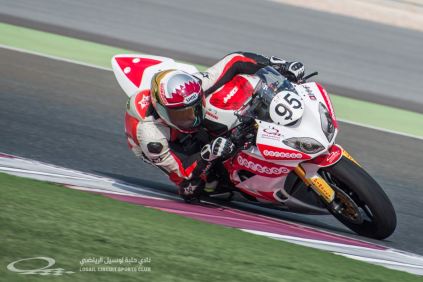 Mishal Al Naimi won the opening race of the Qatar Superstock600 in an exciting and thrilling battle with Saeed Al Sulaiti and Nasser Al Malki.

Al Nami who got the pole position yesterday in the Superpole manage to take the lead during half of the race but Al Sulaiti and Al Malki were too close to him that it was impossible for him to create a gap.

‘ I am very happy with this result, I didn’t expect a fight too challenging with Saeed and Nasser, they were very fast and fight a lot to win the race. When I started the race, I felt I was very fast and after 3 laps I looked back and I saw Saeed and Nasser behind me and I thought I cannot push until the end of the race like this and I am luck I won the race in the last lap, it was a very good race’ said Al Naimi after his win.

In the sixth lap, Al Sulati overtook Al Naimi and tried to keep this position until the end of the race but in the last lap, Al Naimi passed him and won the race. ‘ It was a dramatic race, one of the races I enjoyed most, I was expecting a fight but not from the start until the end. When it was five laps to go I tried to overtake Mishal and create a gap but unfortunately it was not possible to get distance and in the straight line of the last lap he overtook me. Happy with my performance but not with the second position and I push more in the second race. Congratulations to all the riders and winner and thanks to MOCS, QMMF and LCSC’ said Al Sulaiti.

The podium was completed by Nasser Al Malki who finished in third place. ‘I am very happy today, but not lucky enough. The race in the beginning ws good with the bike and tyres but after seven laps I started to lose my feeling in the bike and I slide a lot with the rear tyre and the suspension I think it was stocked when I pushed more hard , I didn’t respect this lap time, I can go more I feel but the problem was that I couldn’t push more the bike. I started to lose the grip and lose my position lap by lap but I keep the gap not far and hope race 2 better as I have all the race grip now’ Al Malki said.

Thrilling battle in the opening race of Qatar Superstock: Al Naimi wins in the last corner